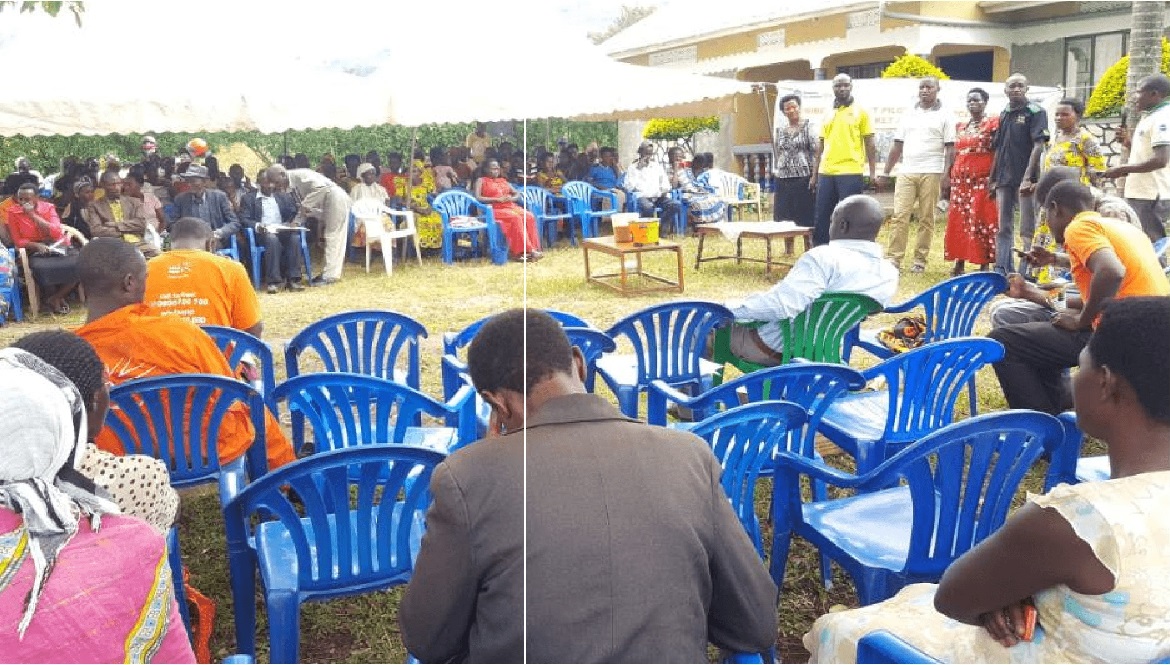 Stromme Foundation has supported Farm Concern International, FCI, to implement Commercial Villages for Market Access & Financial Services Project for 1,000 smallholder farmers organized into 5 Commercial Villages in Rubirizi and Bushenyi Districts, Uganda. The main objective of this project is to improve market and trade efficiency for smallholder farmers and wholesale buyers along target value chains. This is being achieved through the Commercial Village Model, saving groups and linkages to financial institutions, business partnership with formal and informal market actors; digital innovations for trade and extension, as well as linkages to business development service providers.

In Uganda, access to competitive markets remains one of the major challenges facing smallholder farmers. Specifically, smallholder farmers are constrained by low level of commercialization, limited access to markets, multiple layers of predatory market players that reduce gross margins and, limited access to market information. Farm Concern International (FCI) is implementing the Commercial Villages for Market Access & Financial Services (COVIMAP) project to address these market constraints. FCI is applying the value network approach to targeted value chains in Rubirizi district of Uganda, to improve access to markets for 1000 households, 10 wholesale buyers in 5 villages. The main objective of this project is to improve market and trade efficiency for smallholder farmers and wholesale buyers along target value chains. This is being achieved through the Commercial Village Model, saving groups and linkages to financial institutions, business partnership with formal and informal market actors; digital innovations for trade and extension, as well as linkages to business development service providers. Specific interventions include;

The project anticipates the following outcomes;

Rubirizi and Bushenyi districts are characterized by traditional marketing systems that are predominantly informal with high levels of trade and business inefficiencies, poor information flow as well as several chain actors. The marketing systems also have low volumes of market demanded varieties as well as inefficient transport arrangements which often results in high cost of products. In some villages, farm produce does not reach potential markets. The project is harnessing various domestic marketing systems through market driven production and market access of selected value chains. Therefore, improving market and trade systems is paramount in facilitating market access and linkages for the benefit of farmers, traders and other business support service providers. 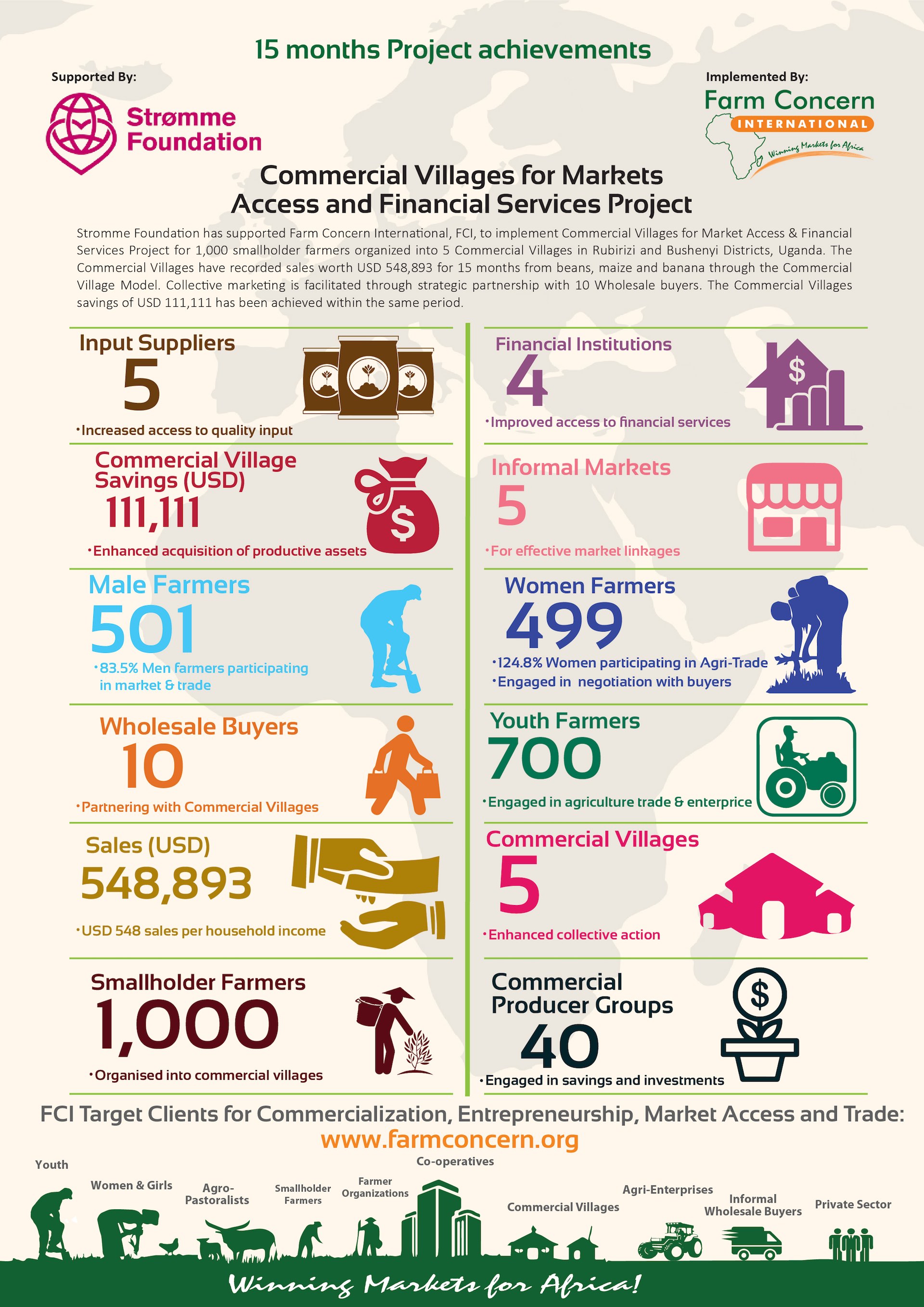 The project worked with Community Managed Microfinance (CMMF) groups that were already being supported by Stromme Foundation East Africa (SFEA) and COVOID. The project however, provided additional training and technical support on savings and financial management. Beneficiary households in Rubirizi and Bushenyi were able to stabilize their assets, increase their incomes and continue along the pathway to commercialization with greater emphasis on market pull due to improved savings from the sale of their produce.

Savings groups generally provide some small-scale microfinance in rural communities. Savings and credit groups were a fundamental component of the project, simultaneously providing credit to smallholder farmers as well as a potential safety net to cope with shocks. During the end term evaluation, participants from all farmer focus groups reported improved savings and credit practices as a result of their involvement in the program, allowing them to send children to school, better budget household expenditures, and start small businesses.

At the commencement of the project, survey findings established that majority of farmers were keeping records (99%) majorly on savings and a few on sales while records on production, investment and farm inputs were not being kept (Rubirizi & Bushenyi Districts Value Chain Analysis, FCI, 2017). Savings records were being kept because the targeted CMMF groups were already saving money together. By the time the End line survey was conducted, almost all farmers (97.7%) were keeping investment records and a growing number were keeping sales and production records as shown below:

The COVIMAP project aims at creating viable market opportunities for both core value chains (bananas, maize and beans) and non-core value chains (cassava, avocados, onions, tomatoes) within the 5 CVs in Rubirizi and Bushenyi districts. In this regard, four (4) trade fairs were facilitated within the 5 CVs with a total of 431 farmers participating (279 females and 152 males).

During the tradefairs, produce sold included banana, beans, maize, cassava, onions, tomatoes, avocados, sugar cane, and groundnuts among others. The total sales made during the trade fairs amounted to UGX 3,615,000 (USD 1,032) as shown below: 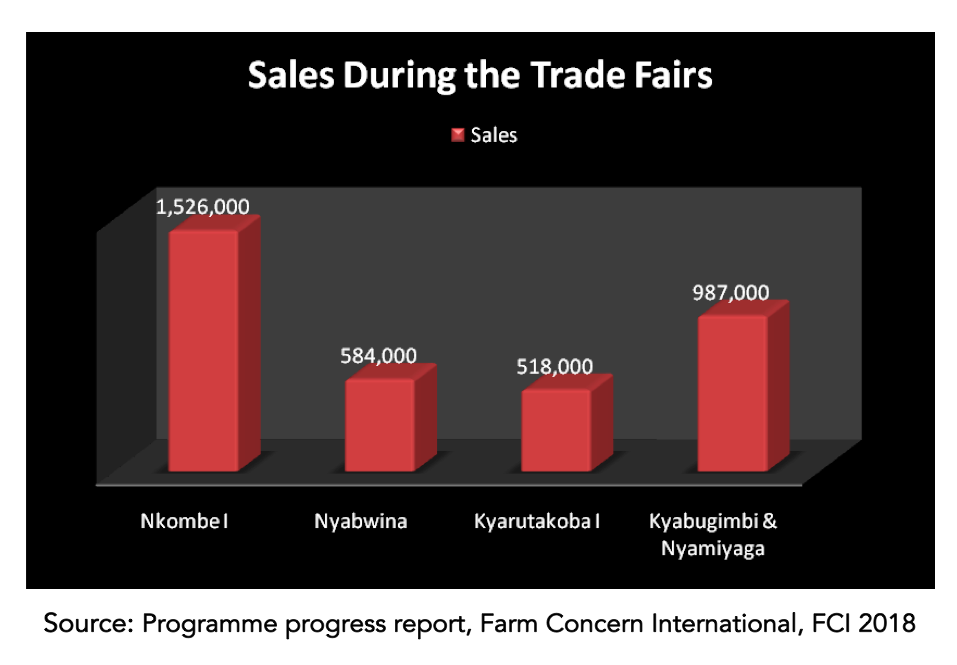 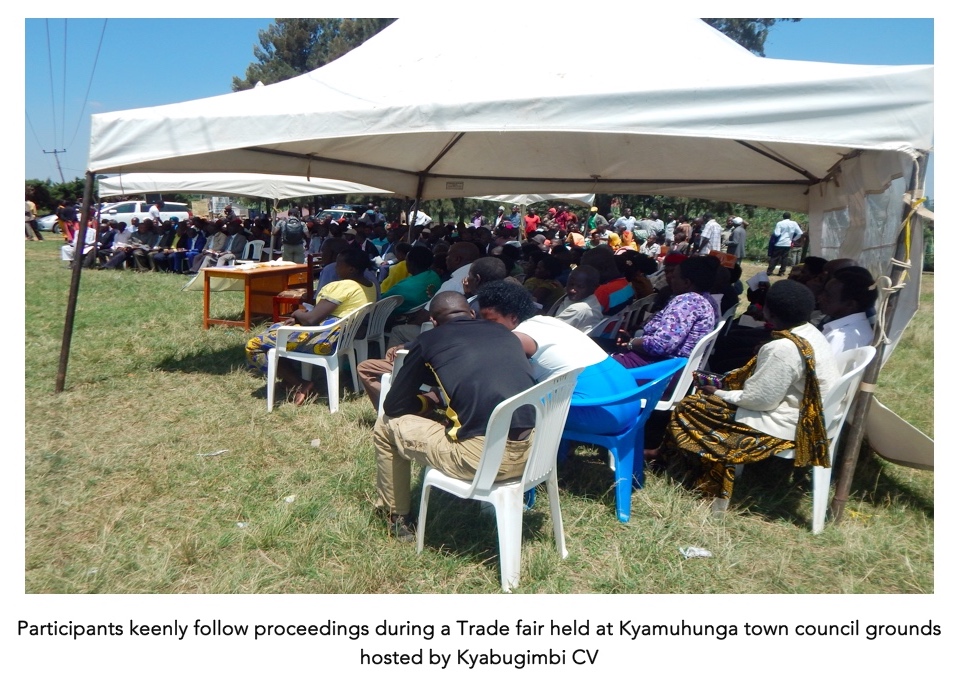 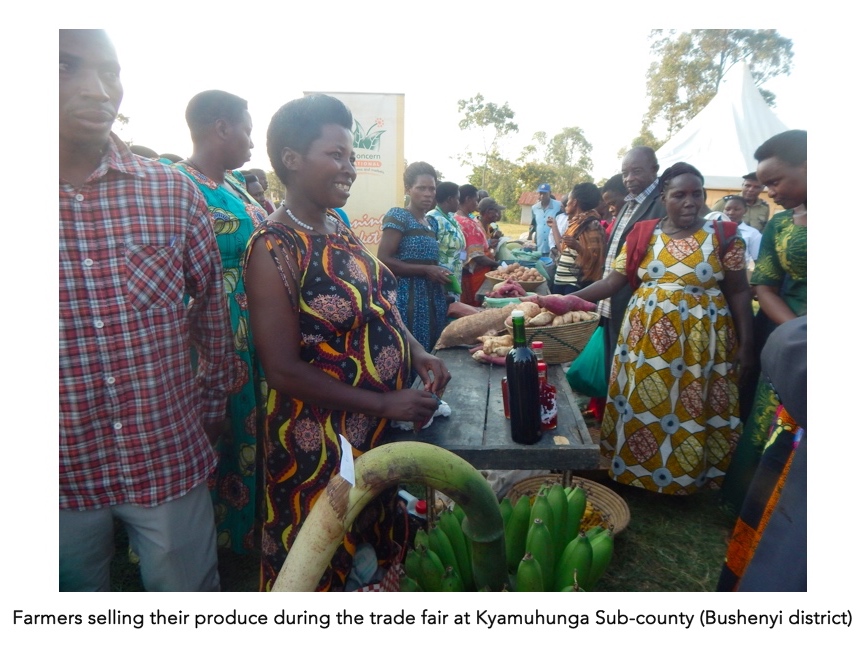 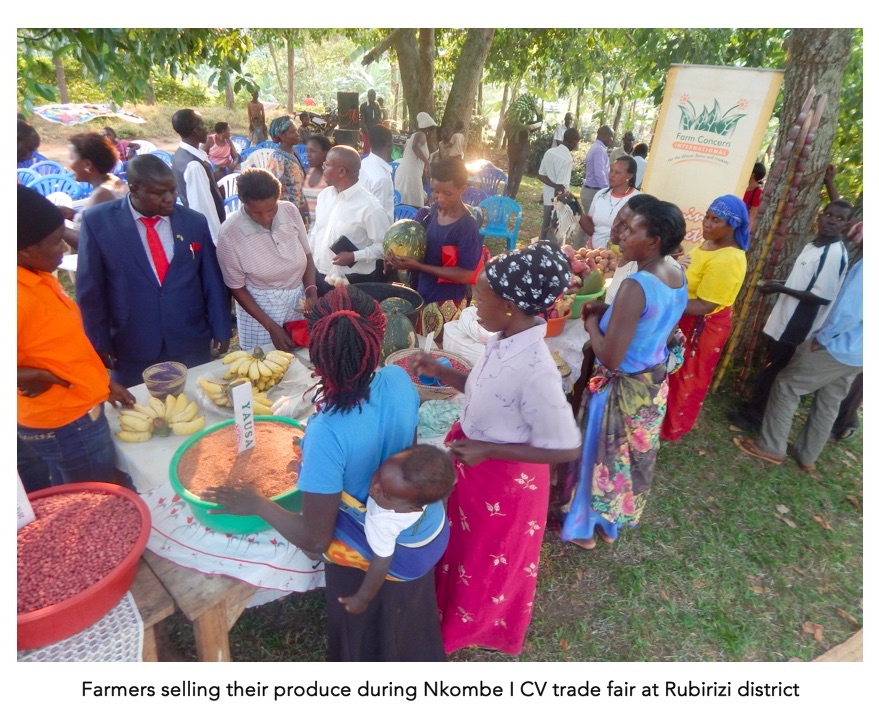 Market Development and Linkages for Smallholder Farmers and Informal Traders

Small-scale subsistence farmers in Rubirizi and Bushenyi face a number of constraints such as poor market access, increased price variation, uncertainties on loss levels, poor storage systems and exploitation by middlemen. FCI designed market development and access strategies with the objective of providing farmers with knowledge and skills on how to establish better and sustainable strategic business partnerships between informal market intermediaries and Commercial Villages.

The training module consisted of helping CVs to know how to identify commodity based market intermediaries for strategic partnerships and establish linkages between target markets and commercial villages. The training for traders focused on strengthening the capacity of traders on business skills and establishing commodity based traderâ€™s associations. According to the project end line survey, 98.5% of respondents mentioned that they had been linked to new markets as a result of the project. The markets farmers have been linked to are mainly wholesale markets (65%) as shown below:

It is estimated that one third (30%) of the food produced for human consumption is lost or wasted along the supply chains globally. Proportionately this translates into 1.3 billion metric tons of the total volume of the food produced. Food is lost or wasted throughout the supply chain, from the farm/production stage down to the consumption stage. Each actor along the supply chain incurs or concedes some level of loss/waste. For developing countries in Sub-Saharan Africa, higher food losses (FL) are reported at the production and immediate postharvest stage (downstream). The two stages alone account for 25.2% of the total losses. These downstream losses are attributed to lack of appropriate technologies, poor postharvest handling practices, and general inefficiencies in food supply chains. Therefore, reduction of Food Losses and Waste (FLW) is an important strategy to ensure food and nutritional security in efficient and sustainable food systems.

Post-harvest management training at Commercial Village level so as to reduce post-harvest losses on-farm and thus improve farmersâ€™ profit margins was conducted at the onset of the harvesting season for beans and maize. FCI built the capacity of 294 farmers (190 females and 104 males) during the last quarter of the project implementation- July to September 2018. Topics trained included improved drying methods (such as tarpaulins); improved shelling methods (including use of hand-held maize shellers and hermetic storage bags for protected storage of produce on-farm); and improved storage methods.

FCI also enhanced the capacity of 228 farmers (162 females and 66 males) within the same quarter on making of compost manure as a low-cost fertilizer initiative. The adoption of compost manure will supplement the use of farm yard manure and inorganic fertilizers which are deemed relatively costly for the farmers. Compost manure will also aid with soil conditioning, since it not only adds fertility to the soil but also acts as a natural pesticide that will translate to improved crop productivity within the commercial villages. 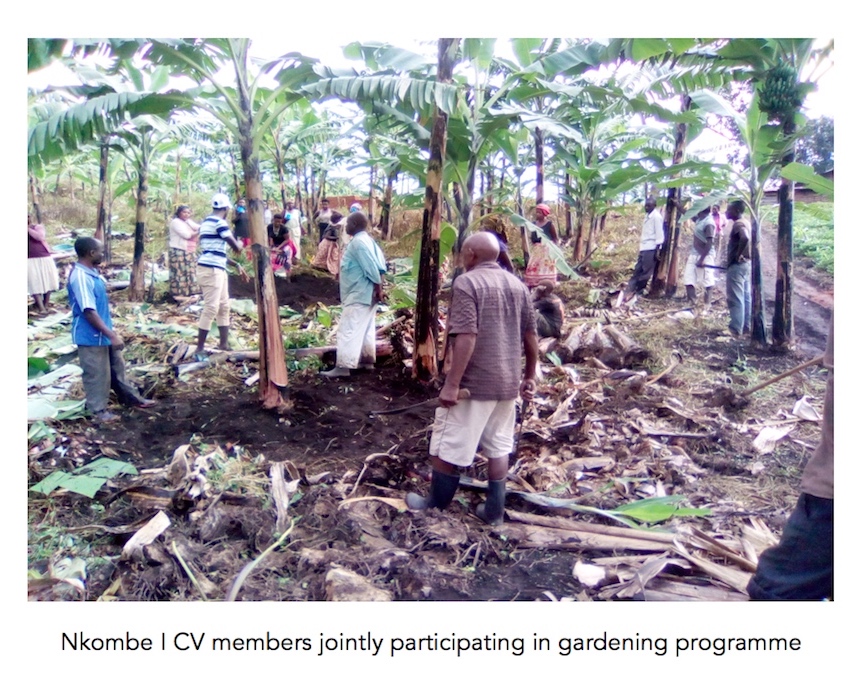 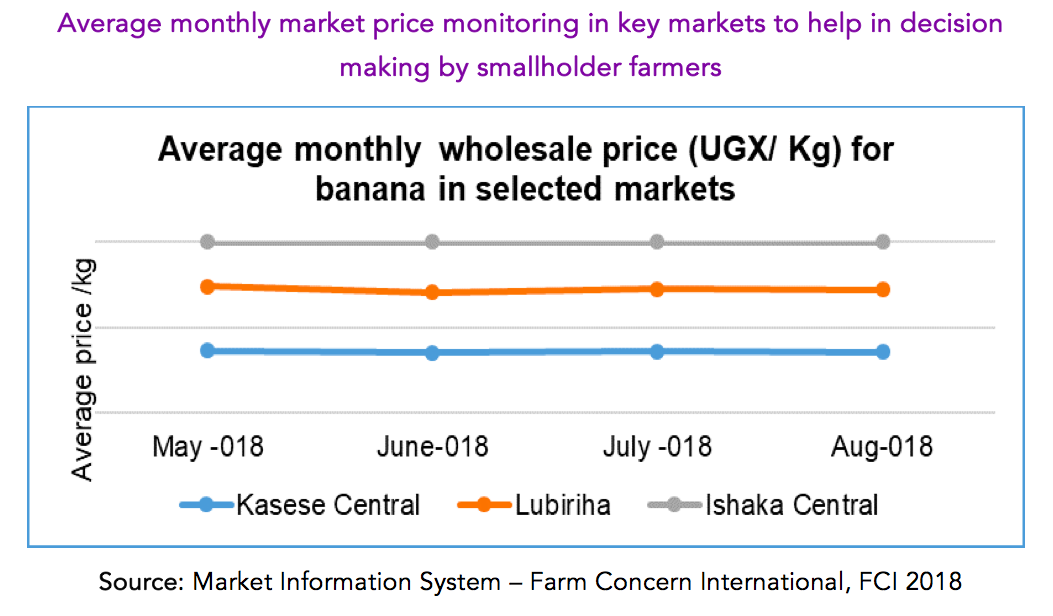 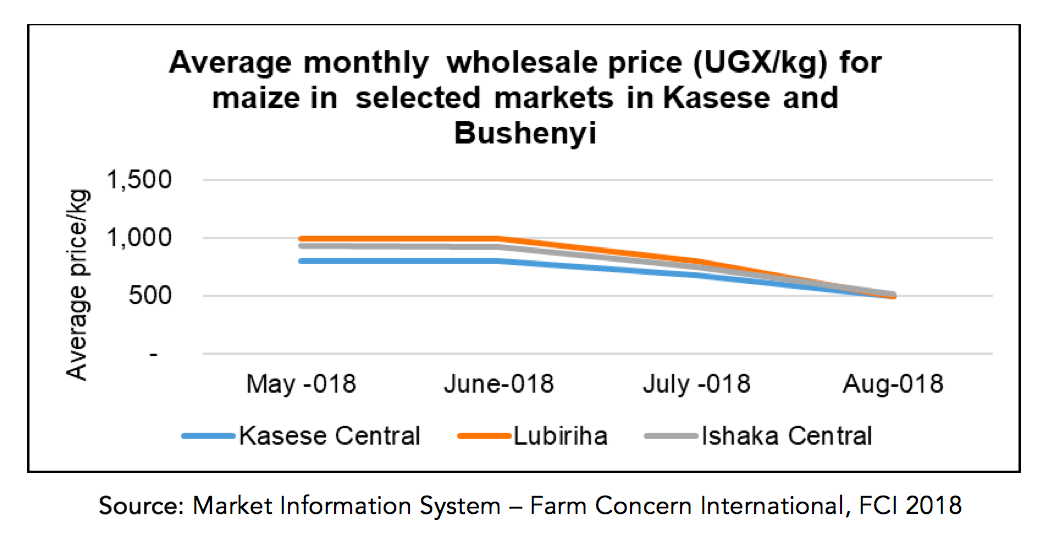