Banana production is concentrated in the South of Somalia, where an ingenious system of barrages and dams provides over 130,000 ha with access to 'gravity irrigation' from river water from the Ethiopian highlands. The production is concentrated in Balad, Afgoye, Awdegle and Janaale districts of Middle Shebelle and Lower Shebelle regions where Farm Concern International jointly with FAO- Somalia funded by European Union has been implementing a Rural Commercialization project since 2012. Â Somalia banana industry was one of the flourishing and largest exporters in East Africa, the production ceased during the 1991 civil strife in the country. Around 3,000 ha are currently under banana cultivation in the districts providing a year-round local supply since banana is one of the highest consumed commodities daily by the natives.Â

Thereâ€™s however a need for increased support for greater production. Farmers need a market to sustain and improve their production and increase their incomes. Itâ€™s on this basis that a Value Chain Analysis (VCA) research was undertaken by Farm Concern International on behalf of FAO Somalia to inform targeted commercialization interventions within the high production areas of Lower & Middle Shebelle and Lower & Middle Juba regions in South Central Somalia. The VCA was mainly aimed at identifying key value as well as establishing key opportunities and gaps to be addressed along the value chain.Â

Key findings on banana include;

Production Analysis: The average land acreage per household was indicated as 1.99 acres with over 90% (1.91 acres) utilized for farming. Middle and Lower Shebelle regions had relatively higher land sizes at 2.47 and 2.2 acres, respectively. Â Crops such as banana, sesame, watermelon and onions are grown for commercial purposes. Generally, it was indicated that most farmers grow the local varieties and do self-seed propagation hence the yields are relatively low.

Market access and trade analysis by farmers: Banana was sold in local markets and urban markets outside the district with the bulk of the commodity being taken by retailers (60%), brokers/agents (20%) and wholesalers (20%). Wholesalers sold bananas to retailers (33%), consumers (42%), institutions, distributors and other buyers (8%) respectively. Bananas were mainly sourced from the large farms who sold a significant portion of their harvest to brokers involved in the export of Bananas to Europe. Banana was consumed by 10.2% with 42% of consumers indicated they consumed bananas daily and 25% at least 2 to 4 times per week.Â 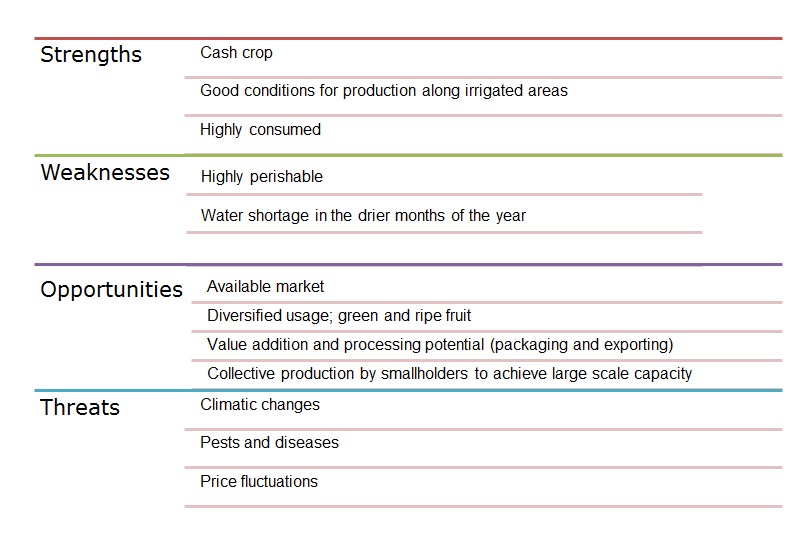 Consumer Analysis Almost all the food crops are mainly consumed on a daily basis with maize being the predominant staple food consumed daily by 46% of the consumers and banana at 25%. Over 85% of the respondents purchase agro-commodities from the local open air markets this were more frequented mainly because they are easily accessible, offer consumers variety for choice as well as the fact that commodities in these markets are relatively lower priced. Consumption trends for bananas have remained almost similar for the past 2 years with preference for ripe and raw bananas. 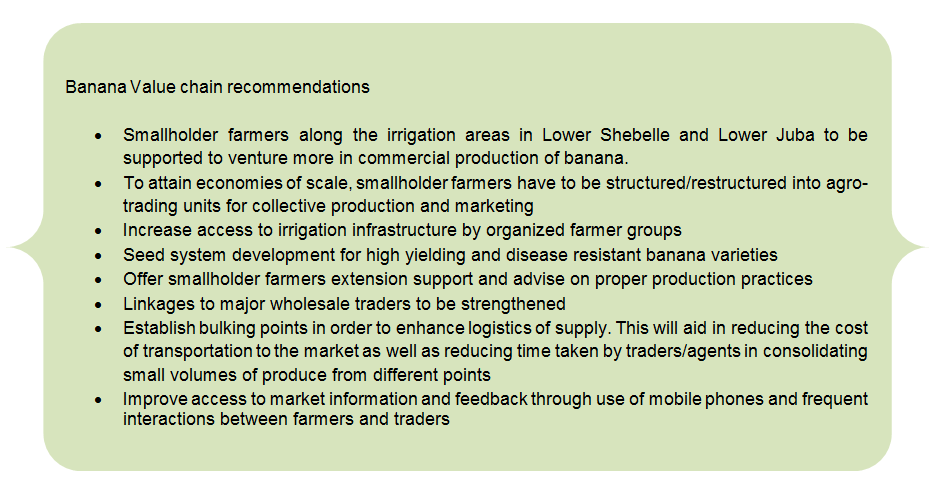