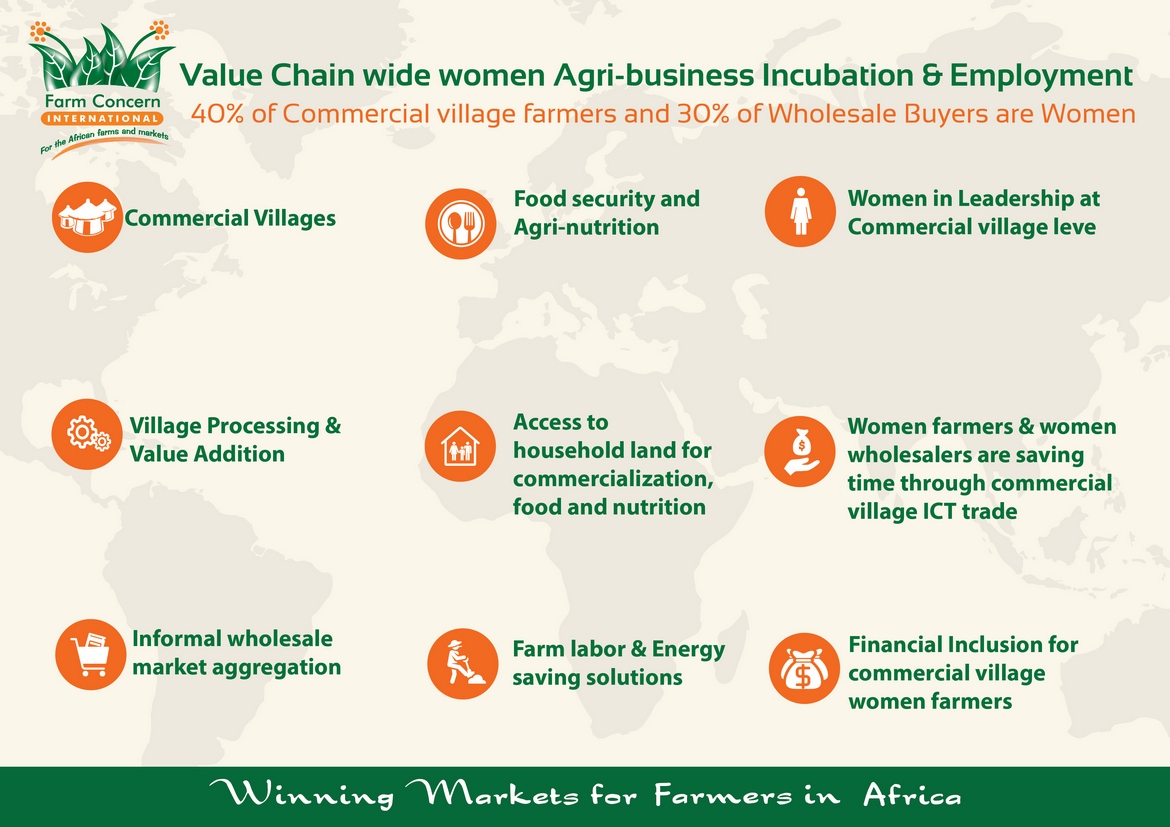 FCI in her programmes ensures that women farmers and traders save time through the Commercial Village ICT Trade Platform.  We have also innovated farm equipment e.g. the Kijiji chipper and energy solutions to help women save labour costs and time spent doing farm activities

Across rural communities and indeed Subsaharan Africa, the vast majority of farmers are women. The potential of women entrepreneurs remains largely untapped in developing and emerging markets, with many lacking access to the financial services, skills and opportunities they need to become successful business owners

Farm Concern International through Mama Trade Approach a Swahili term translated “women in trade” realizes that women spend a lot of time running between their households, the farm and market place. This in the process leads to lots of time wastage that impact on their outputs. FCI has worked with these rural communities and encountered the difficult task of women in managing household, farms and facilitating market access for their produce.

FCI Mama Trade business approach is aimed at encouraging, motivating and engaging the women in Africa to intensify their participation in Agricultural Systems for increased incomes. The model is applied through an interactive and women integrative approach that demystifies the myth that being a farmer results to poverty and that farming is for the elderly. A good example of women intervention by FCI is the E-Women dial up Initiative developed by FCI, the Afma-X (Africa Markets and Farms Exchange) platform is a mobile phone based virtual platform with support from the Bill and Melinda Gates Foundation under GCE Phase1. The integrated virtual platform enables input sourcing, services and commodity virtual trading that integrates marketing (e-marketing), business services (e-logistics), payment system (e-payments) and partnerships (e-business partnerships). From the E-women dial up project 95.8% of the farmers registered on Afma-X have saved time and labour through use of the platform.

It dawned on Ms. Hakule Dida that farming right has great potential to earn more after attending commercialization campaigns by Farm Concern International under the Agro-pastoralist Commercialization and Markets in Northern Kenya Programme supported by Tearfund. After adoption of green grams farming in April 2015, she harvested 175 kgs from one acre. She sold 150 kgs at 110 per Kg earning Kshs 16,500 (USD 165); the highest she has ever made from her one acre piece of land...  Read More

There is one open market that operates at night in Kigali and that is the Irish Potato market on the outskirts of Kigali City. In the poorly lit night of Kigali suburb of Gitikinyoni competition played out as brokers and wholesale traders jostled for Irish potatoes. “Produce suppliers would spend the night at Rulindo so they could be at the market by two in the morning” says Ayinkamiye Marie Therese, one of the Irish potatoes traders in Kabuga Produce Market on the outskirts of Kigali city...  Read More

Before the Domestic Markets Regional Programme implemented by Farm Concern International and funded by Bill and Melinda Gates Foundation intervention, Esther a mother of 5 would grow exotic vegetables and sell the produce to brokers who sourced at farm gate. She would make average annual sales of Kshs. 60,000 due to the exploitation by middlemen who took advantage of her desperation to sell at a lower price. She later joined Kabunge Commercial Village and began selling her produce to Uchumi supermarkets through FCI linkage...  Read More

Over 5,300 women on AFMA-X mobile phone app to increase productivity

Mobile communications technology has quickly become the world’s most common way of transmitting voice, data, and services in the developing world. Given this dramatic change, mobile applications (m-apps) in general and mobile applications for agricultural and rural development (m-ARD apps) in particular hold significant potential for advancing development...  Read More

Mobile telephony app to save money and time for smallholder farmers

A survey conducted by Farm Concern International (FCI) on 2,390 farmers revealed that smallholder farmers can save money and time if they can optimise the readily accessible mobile platform. Research shows that Kenya has a population of 43 million people out of which 30 million (70%) are subscribed to mobile phone services. The acceleration of money mobile phone transfer services and mobile banking have offered an affordable and convenient transactions both in the formal and informal markets...  Read More

The plight of women traders in agri-trade

Women in Africa play a key role in trade and are imperative to Africa’s success in exploiting its trade potential. Women make major contributions to trade in most African countries through their involvement in production of trade goods, as cross-border traders, managers and owners of agri-business firms. Women are deeply involved in production of agricultural products such as maize, cassava, cotton and rice, which have enormous potential for increased trade between African countries and global markets...  Read More

Elina Sultan is a farmer and a village frontline worker from Nyongoro Village in Kilifi who has been in the fore front campaigning on cassava commercialization under the Kenya Cassava Village Processing Initiative supported by Alliance for a Green Revolution in Africa (AGRA) and implemented by Farm Concern International (FCI). Initially, Elina used to be a peasant maize farmer also growing a few cassava stands for subsistence purpose...  Read More