The RAMAC (Regional Agri-Market Access conference) is an annual conference organized by FCI that seeks discuss on the practical solutions for graduating smallholder farmers from subsistence to market led production and how to address the major barriers to the graduation pathway. The conference seeks to highlight the massive investment opportunities available for investors in small holder Agri-trade in Africa and the great potential for smallholder Agri-trade to greatly turnaround the economies of majority of the countries in Africa.

RAMAC (Regional Agri-market Access Conference), 2014, which was held at FCI-Africa Office KARI Campus Nairobi on 18-20 February under the theme of “Unmasking the Engine of African Trade,” brought on board Development partners, Government representatives from the nations we are present, Academicians, Research institutions, Private sector players, Buyers & traders, BDS providers involved in Agricultural value chains and Producers whose contribution to Informal Agri-markets and smallholder commercialization was outstanding. 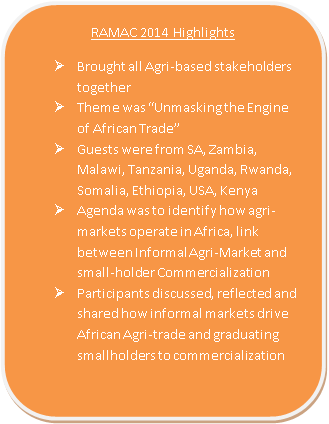 The main agenda of the event was to discuss and identify how Agri-Markets operate in Africa, the link between Informal Agri-Market and Small-holder Commercialization and the one who drives Agri-Trade in Africa. The meeting offered a platform for participants to discuss, reflect, learn and share how informal markets drive African Agri-trade, practical solutions for graduating smallholder farmers from subsistence to market-led production as well as addressing the major barriers that inhibit participation in various Agri-trade value chains.

David Ruchiu, the FCI Africa Director, envisaged the next 10 years being a decade of destiny for the African people as FCI strategically positions its focus to serve in partnership with all. “We are happy to have come this far with informal markets and small holder farmers. Investors in Africa are beginning to appreciate that smallholder farmers remain the critical supply base for agri-value chain in Africa,” he said.

Alesha Black, the Senior Program Officer-Agricultural Development from Bill and Melinda Gates Foundation, emphasized the need to care about smallholder productivity and the informal markets. “If the informal system is the one driving the smallholder economy in the continent, then we need to know about what serves farmers and think of a system that increases food productivity and profits in a more sustainable way. From FCI, I have learnt a lot about volumes transiting over these informal markets, amounting to billions of dollars annually from the crops that we focused on across the different countries,” he said. He added that there is much that remains uncovered about how products move in the informal markets, the different market and assembly points, the fundamental role that trust plays in molding business relationships and the aspects of building trust for all the actors in the value chain among farmers, traders and wholesalers.

Dr. Anne Kinyua, on behalf of Hon. Phyllis Kandie – the Cabinet Secretary for East African Affairs, Commerce and Tourism, commended FCI for the work they have done to farmers by creating linkages between the smallholders, retail markets and commercialization of subsistence farming. The cabinet secretary noted that FCI has created partnerships between the development partners, researchers and have helped farmers’ access markets thus improving their income and livelihoods.

The event ended with panelists’ discussions which focused on field trip to commercial villages in Kieni and Karatina, the role of informal trade in driving Agri-value chains, the role of partnerships in informal trade facilitation, trade opportunities in informal and formal markets, grain and staples trade by development organizations across the region.