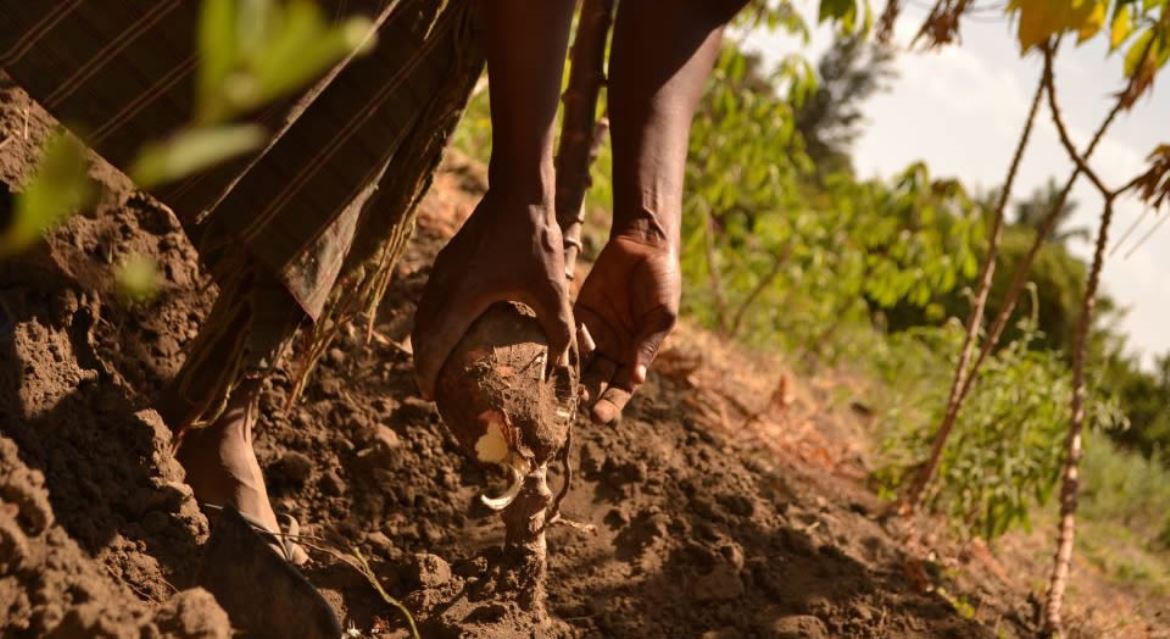 Smallholder farmers at the end of year three have realized a market value of assorted cassava products worth USD 41,641,960.25 through the Cassava Village Processing Initiative [Kenya & Tanzania] implemented by Farm Concern International (FCI) with support from Alliance for a Green Revolution in Africa. These included fresh market for roots worth USD 33,500,581, industrial buyers for cassava chips worth USD 8,086,427, cassava cuttings worth USD 45,866 and value added products at USD 9,086.25.Â 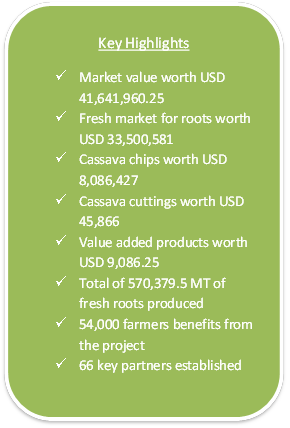 The total household savings recorded from the commercial villages amounted to USD 92,153.3 which was mobilized through these sales.Â

A total of 570,379.5 MT of fresh roots was produced, utilized for food security and traded across all the sites. Through strategic partnerships with market players and other key partners, over 54,000 farmers benefited from increased production and expanded income brackets. This resulted to sustainable trade engagements between the Commercial Village members and the various categories of tradersâ€™ namely fresh market, food and feed companies. The smallholder farmers were organized to collectively produce, process and market their cassava leading to accrued benefits because of economies of scale and structured trading.Â

To date, 40,013,000 cassava cuttings have been planted across the commercial villages through the village based seed systems. An impact assessment carried at the end of the Programme indicated that the overall average acreage under cassava increased from 0.25 acres to 1.8 acres per household. This was as a result of enhanced adoption of improved varieties, see Figure Â below.Â

The highest acreages allocated for cassava was in Uganda (Buyende &Jinja) at 3.7 acres, followed by Tanzania (Meru) at 1.5 acres and Kenya which was 0.8 acres.

However, according to a research study done by Food and Agricultural Organization of the United Nations, 2007, cassava still has a reputation as a poor personâ€™s crop; a last resort crop. It is produced mostly by smallholders on marginal and sub-marginal lands in the humid and semi-humid tropics.Â

In Africa, an estimated 70 million people are dependent on cassava as a primary source of food, contributing over 500 kcal per day per person. In the 15 countries targeted in Central, Eastern and Southern Africa, over 4 million people live in areas of high cassava production. Often, these are among the most remote and poorest areas.Â

However, when compared to other cassava producing regions such as West Africa or Latin America, yields in Central, Eastern and Southern Africa tend to be lower. Of the countries in the region producing over 500,000 tons per year, Central African Republic (3.0 T/hectare), Zambia (5.4 T/hectare), Rwanda (6.5 T/hectare), Mozambique (7.4 T/hectare) and the Democratic Republic of the Congo (8.1 T/hectare) stand out as below the regional average of 8.8 tonnes/hectare. Some of this loss in yields can be attributed to the spread of cassava diseases in the region.

Additionally, the full range of potential uses of cassava is under-exploited in Central, Eastern and Southern regions of Africa. In some countries (notably Malawi and Zambia) there are programmes to promote further development of the cassava production sector, as an alternative to maize in increasingly drought-prone conditions, with investments in post-harvest treatment facilities and marketing.Â

FCI is implementing Programmes that promote cassava commercialization given the immense opportunities available to improve the livelihoods of smallholder farmers.Â