Juma Fondo, a father of 10 children and married to one wife, was a well-known perennial maize and cowpeas subsistent farmer in his 1.5 acres farm.

Before the introduction Pwani Commercial Villages for Markets Programmme supported by Tearfund and implemented by FCI, Fondo despite lacking knowledge on good agronomic practices for these crops and the poor yields, he could still work hard in his farm to earn him little money to sustain his daily domestic needs.

He had spared half acre portion for cowpeas and planted M66 cowpeas variety which gave him an average yield of 150kgs every season and the rest of the remaining portion of farm was grown with maize.

Training on commercialization and good agronomical practices under the programme has resulted in a positive transformation of Fondo’s life. He laments how he wasted his time and resources on traditional farming methods which barely earned him little to provide food for his family.

With the continued training on commercialization, adoption of good agronomic practices and market linakges, he confirmed to have gained enough knowledge and adopted the new variety of cowpeas (K80).

In April 2016, during the first planting season, he decided to plant cowpeas on half acre of his farm and considered every aspect of good agronomic practices including right spacing, pest and diseases control among others. He managed to harvest 230kgs of cowpeas for the first season and sold at Kshs. 100 per Kg earning him Kshs. 23,000 (USD 230) despite the insufficient rains experienced in the County. This was a significant improvement from his previous yield of 150 Kgs from the same piece of land. He bought 4 goats worth Kshs. 12,000; used Kshs. 8,000 to take his son to driving college and the rest was used to pay school fees for his children who were in primary school. 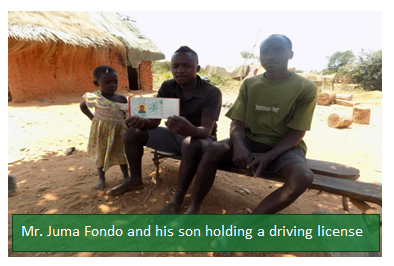 Mr.Fondo decided to expand his cowpeas farming to 1 acre during the second season which begun in the month of September, 2016 and harvested 506 Kgs of cowpeas; he spared 150 Kgs for family consumption and sold 356 Kgs earning him Kshs. 56,120. He invested Kshs. 6,000 on small enterprise of buying and selling fuel to motor bike riders at the village, bought 4 indigenous chicken worth Kshs1, 800 and the rest was used to pay school fees and purchasing food items for his family. As a result of the motivation from the sales, Juma has expand his farm to the current 1.5 acres.

“The project has helped me a lot. The four goats I bought previously have multiplied to nine. Recently, I sold 2 of them at Kshs. 4,000 each to pay my wife’s hospital bill when she delivered at a private hospital. I have wasted a lot of years, time and resources doing subsistence farming, but now I can make Kshs. 56,120 from Cowpeas in an acre, I will allocate more acres of land for cowpeas in the coming seasons,” says Fondo.