The Semi- Arid Region Commercialization Programme implemented by World Vision Kenya and Farm Concern International with support from World Vision Australia enabled smallholder farmers in Kalawa and Mwala to post impressive sales in the month of June. In Kalawa, sales worth Ksh 921,970 were realized in while in Mwala, farmers managed to make sales worth 319,450. Farmers made the sales primarily from the sale of green grams, tomatoes and cowpeas in Kalawa and tomatoes, watermelons and onions in Mwala. . 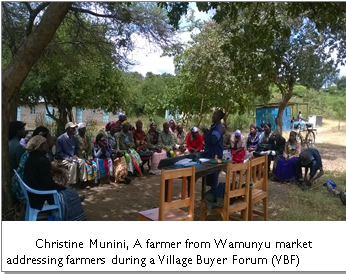 A year ago Ezekiel Mutuku, commonly known as Katethya (trade name), one of the most successful green gram traders in the region was linked to 742 farmers in Kathulumbi, Kathongo, Ndauni, Kavumbu and Miageni Commercial Villages under the Programme. This made it convenient for him to access the green grams because of collective action. According to Katethya, before the market linkage, he used to travel long distances looking for produce to buy which would consume a lot of time and money.

One of the factors necessary for sustaining the economic impact of smallholder farmers and enhancing their livelihood resilience is savings. From the onset, the Semi- Arid Region Commercialization intervention in Mwala and Kalawa Integrated Programme Areas (IPAs) set out to increase the financial capital through market led savings..

The success stories from Mithanga Horticultural CPG & Muamba CPG give an indication of what the Programme has been able to achieve through its Commercial Village savings model.

Mithanga Horticultural Commercial Producer Group, in Mwala IPA,  was formed by 20 members five years ago with the purpose of increasing their income through growing and selling vegetables as well as savings through “merry go round” system.

Each member of the group would save Ksh 100 per month and receive Ksh 2,000 after 20 months. With this system of saving, it took one and a half years and the amount of money received was too little to investment in business. However, through capacity building initiatives by World Vision in partnership with Farm Concern International (FCI), the 20 farmers were trained on cash flow and loans managements, record keeping and investment.

As a result, 10 members borrowed Kshs 100,000 from the savings scheme and were able to purchase moneymaker pumps and construct back herds for water harvesting. In addition, four members of Mithanga Horticultural CPG used the water pumps for onion farming and got total sales worth Kshs 32,000.

Currently the CPG has been linked to Vision SACC0 and trained on loan management. Seven members applied for a loan of Kshs 200, 000 to purchase drip irrigation kit.