Farm Concern International (FCI) recently held a trader-farmer event which attracted 130 smallholder farmers in Kabondo Constituency in Homa Bay County.  The event, led by Jared Kassam, the team leader and Hub Manager for Lake Victoria Hub, was presided over by a representative from the Investors of Homa SG, Mr. Gabriel Oduor.

In addition to getting a confirmation of new market opportunity, farmers used the forum to learn more about the investor requirements like the varieties, volumes, supply sequences, prices and establishment of collection centers. They also utilized the event as a platform to sell various value added products like cakes, bread and biscuits promoted at household level. Farmers also learnt various technologies of value addition that were meant to leverage on their income and profits. 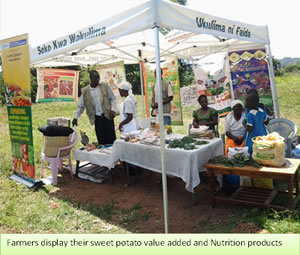 Extension officers from the Ministry of Agriculture taught farmers on various good agricultural practices like pre and post-harvest practices of sweet potatoes, seed selection, spacing and proper use of chemicals.

Subsequently, input dealers like Syngenta and pioneer seed companies took the opportunity to sell their wares like seeds, fertilizers and chemicals to farmers at reduced prices. This helped farmers save huge amounts of money due to their collective buying.

However, farmers complained of huge distances they covered to arrive at the event and this contributed to time wastage, late arrival and delayed starting of the meeting. The samples of produce showcased at the event were also few following the prolonged drought that had hit the region. The drought, farmers said, contributed to huge losses and shortage of agricultural produce sold to the markets.

With the new upcoming market opportunities however, farmers are hopeful that they will recover from some of the losses suffered previously even as they hope for favorable climatic conditions in the next planting season with the onset of long rains.

Farmers were also encouraged to embrace collective action in sourcing of inputs, bulking and marketing through the formation of producer groups so as to competitively participate in the market place as a trading bloc. Kassam also promised that FCI will link all farmers registered with the Commercial Villages to the already existing village based seed multipliers to access clean sweet potato vines at reduced price and cost. This will in turn increase both quality and quantity thereby leading to increased income.