The Embu Open Youth Sports Tournament 2015, sponsored by Farm Concern International (FCI), is an annual event that provides students and other organized youth groups  in the region an opportunity to compete in sports and learn more about agriculture. This year, the tournament took place at Kangaru Schools, Kigari Teachers’ Training College and Embu University College on 7th and 8th February 2015. 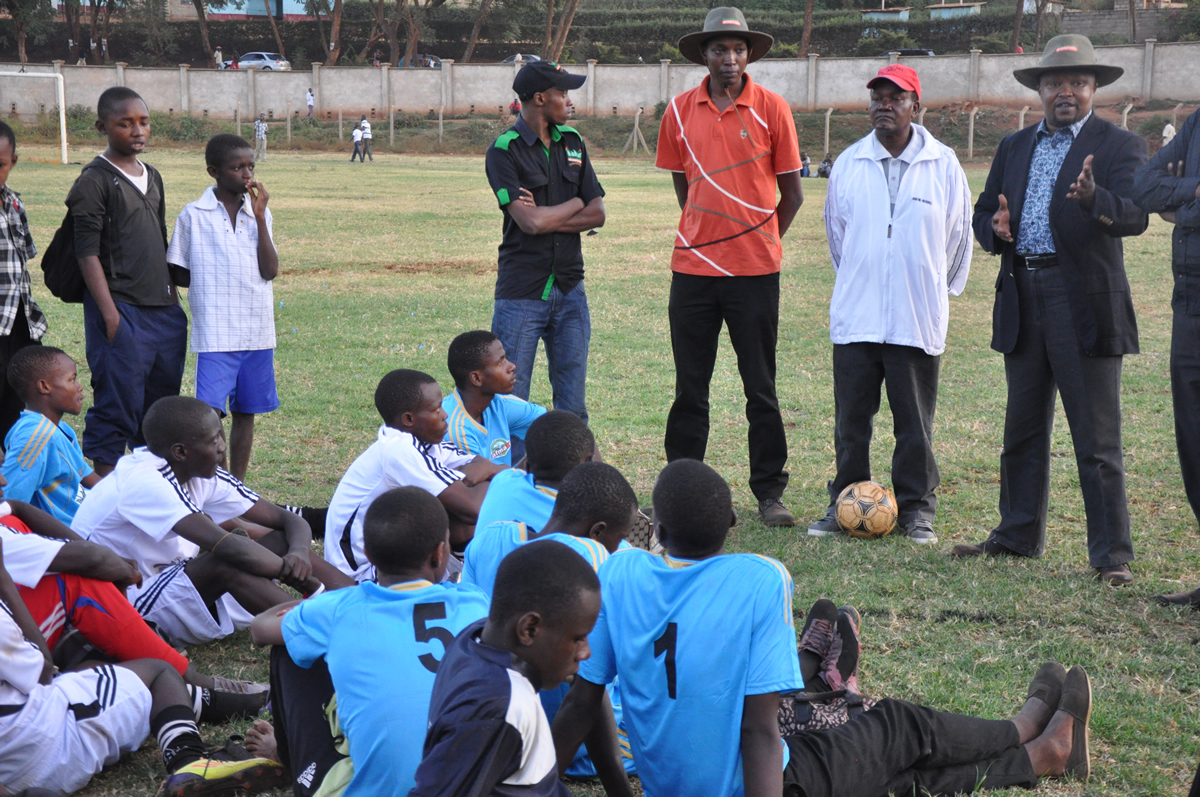 The two day event  involved various sporting activities like soccer, rugby, basketball, hockey, volleyball, handball, netball, rackets and attracted more than 7,000 people who comprised over 6,500 students and other youth in the region. Other participants of the event included 100 coaches, officials from the Kenya Institute of Curriculumn Development, partners and stakeholders.

The concept was hatched in 2009 by a group of teachers in Embu County with an aim of nurturing the youth to unleash their potential through sports and agriculture so as to contribute positively to personal and national development.

During the event, FCI took the opportunity to encourage youth to take up  agriculture as a subject in school and as a career in the future. Sessions were also held with the youth facilitated by the African Farms and Markets Exchange (AFMA-X) team showcasing the upcoming technologies in agriculture. FCI’s Agri-Business Development Manager Mr. Benson Wando demonstrated how the AFMA-X commodity exchange platform facilitates farmers and traders to buy inputs, sell their produce to subscribed traders and access market information.

According to a few students interviewed,  majority of youth have a negative attitude towards farming and prefer courses that offer white colour jobs. They shun agriculture related courses in higher institutions of learning. They are not to blame though, the youth being agile are interested in investing their efforts in activities that produce results. Having watched their parents and grandparents probably live as paupers whilst being heavily involved in farming has also contributed to the negative vibes. The truth is, without youth involvement in agriculture, the sector is in jeopardy with the average farmer in Africa being 60 years old.

Additionally, agriculture has an image problem. Simply put, the majority of youth do not find agriculture “cool” or attractive. Most of the youth think that Agriculture is a back breaking, labour intensive exercise with no returns. There is a need to turn this around for youth to realize returns on their investments and improve their livelihoods.

The exodus of rural youth means fewer small-scale farmers tomorrow, potentially drastically changing the profile of farming, (International Institute for Environment and Development, 2012)1. FCI realizes that agriculture is the conerstone of Africa’s economy and accounts for 30 to 40 percent of the continent’s total gross domestic product, and almost 60 percent of its total export earnings, (International Food Policy Research Institute, 2014 )2. This opportunity is associted

with favourable climate for viable agronomic practices and investment in agriculture which contributes to robustious economic growth and poverty reduction.

Kenya is an agriculturally endowed country hence the need to sensitize the young people on agribusiness as a central element for sustainable development, poverty and crime reduction. The sporting activities brought participants from different ethnic backgrounds and by extension fostered national unity, cohesion and integration as envisaged in the Kenyan constitution.

In addition, FCI African Director Mr. David Ruchiu took the opportunity to encourage the boys from Kamiu Secondary to be focused and be determined to excell both in sports and in academics. “It doesn’t matter who you are but what you think determines your future,” he said. “Ensure you spend your life well in school and leave a positive mark. Have the right attitude to treat a setback. If you condemn yourself, that would be the end of you,” he said and insisted that there is need to maximise on any opportunity that comes your way.

The boys from Kamiu Secondary School, most of whom came from poor background lacked words to thank Mr. Ruchiu whose organization provided each of them with a full games kit. Kamiu team played very well making it to the quarter finals. However, they didn’t qualify to the finals after drawing 1-1 with Embu High School. The latter played with Moi High School, Mbiruri, in the finals and won with 2 - 0.

The FCI Senior Programme Manager Mr John Riungu also challenged Kamiu Boys to remain industrious in whatever they did. “Nothing comes on a silver platter,” he said. “We believe in your vision and we look forward to supporting young people like you to soar higher,” he added.

According to the overall regional games co-ordinator Mr. Elijah Kiarie, the major challenge in 2015 Tournament was the overwhelming turn out that was difficult to manage. He also cited inadequate funding as a major challenge to be addressed by the team in the future events.

The games ended at 6 p.m on Sunday with a word of thanks from Mr. Kiarie who represented the entire Embu Tournament Organizing Committee. He specifically thanked FCI for answering their call to sponsor the Tournament and the Kenya Institute of Curriculum Development for providing certificates to the participants.